Suggest some fun/whacky/otherwise interesting decks?
This topic has been deleted. Only users with topic management privileges can see it.

For various reasons, I'm taking a bit of a break from Magic. However, as the guy who runs the local Vintage scene, I'll continue to show up to that to ensure its continued success. For the few tournaments between now and the end of the year, I'd love to play some off the wall decks. If you have any suggestions, let me know!

I was about to suggest like 12 decks from my stream, but I saw your username and realized that you already know them all.

I would suggest Hermit Druid.

I was about to suggest like 12 decks from my stream, but I saw your username and realized that you already know them all.

I'm usually almost as drunk as you when streaming so you should probably remind me!

Severance Belcher. You get to do the best possible thing to do after casting Mana Drain: Shoot your opponent in the face!

Off the wall and wacky decks are among the things that I enjoy most in Vintage. It's a topic I care about very much, so I'm glad to be able to suggest something. I'll put down a list of ones that I've personally tried but the possibilities are honestly endless. I have a big list of potential decks that I want to try, so one day I'll have time to try them all. The old TMD website is actually a fantastic source of inspiration, but it takes a while to look through the information there. Feel free to send me a message if you want to know more about any of this crazy nonsense I've posted.

Channel+Lich's Mirror combo. You can also do what I did and make a Doomsday deck with a Channel/Lich's Mirror pile instead of Lab Man. It's worse, but I did enjoy the look of my opponent's face who let my Doomsday resolve with an Abrupt Decay in hand only to realise a Lab Man was never coming.

Academy Combo with Mind Over Matter/Stroke of Genius (unless the deck in your first post is that). I played this a lot in the 4x Chalice/Lodestone era, including at 2015 Worlds. The only reason I stopped playing the deck was because I wanted to try something new. I honestly believe the deck is quite powerful with some more work put into it. I took my 2015 decklist for a spin with zero changes recently and it handled itself perfectly fine.

Madness Control. Basically using Madness cards (and maybe Squee) with Bazaar as your blue draw engine. You can also go further along this scale and run cards like Bloodghast. There's honestly a lot of freedom in deck construction here because there are many cards that synergise with this type of deck.

5C Stax. I do believe there's been a few showings of this all over the place, but it's definitely not seen very much. From personal experience it's really scary to face. You can also ignore the 5C portion and go with say, red Shops with Welder (think Marinara Shops).

Eureka and Tell. Pretty similar in structure to the Show and Tell style decks in Legacy. I played a little bit with this one some time ago and it was quite amusing. Use Boseiju! You can also just go with Sneak and Show or OmniTell even.

Enchantress. This is actually REALLY good if you get it going. Before the Gush restriction I was working on this one. The only issue I wasn't able to solve was consistency, which I could solve by adding cantrips, but then you weaken matchups. Go for a U/G/w base with Mystic Remora and other good Enchantments, with a Solitary Confinement lock.

Vintage Lands. Basically similar in structure to the Legacy deck, but you'll find it a little harder to pull off in Vintage. That being said you have access to both Fastbond and Bazaar of Baghdad for an insane draw engine. I never had a major problem against many decks but combo is very hard to deal with. Maybe spheres help? Not really sure.

You can probably make a pretty good update to Oshawa Stompy thanks to vengevine, hooting mandrils and hollow one. A deck with wastes, basics, null rods and big creatures seems fun.

You can probably make a pretty good update to Oshawa Stompy thanks to vengevine, hooting mandrils and hollow one. A deck with wastes, basics, null rods and big creatures seems fun.

I really wanted to try a 3-5 color enchantress based around Solemnity/Mystic Remora/Illusions of Granduer and Donate. Any Seal or Bounce spell ends the game after a Donate, and Solemnity lets you break Remora and Illusions while stopping Ravagers and Ballistas. Obv WGU base, but could add red for Pyroblast and the new kitty Donate. Black could be for Tutors, and the DarkDepths package possibly?

This also has allowed me to test Ancestral Knowledge + Argothian Enchantress + Solemnity, which I have to say has been pretty nasty good. Enchantress even has a reducer now in Herald. Lots to try and test, but enchantress is possible now I think.

I ended up busy most of Saturday so I didn't get around to throwing together something funny in time. I ended up on my previously built Paradoxical Oath deck because it was the deckbox closest to my computer screen.

Last year at champs there was a hilarious Dragon deck that side boarded into all the new madness vampires from standard to get around dredge hate. It was quite funny to watch it crush people.

Any New Yorker will tell you that, if you want to find something interesting, just go see what Visna Harris is playing. Here's his Eternal Weekend 2017 decklist: 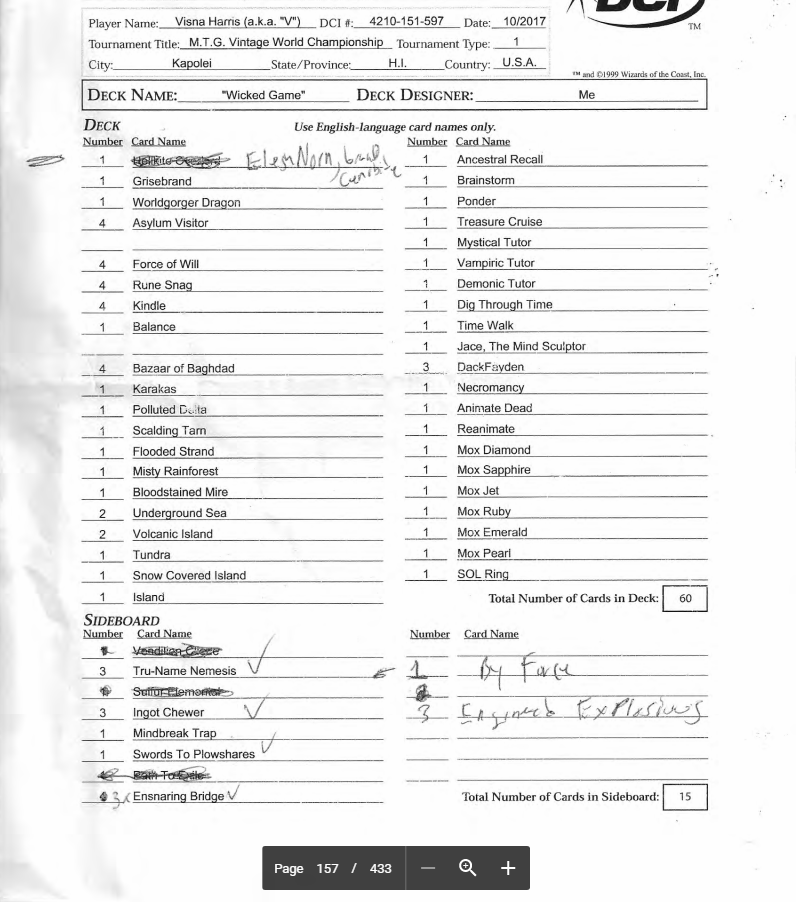 I think vintage enchantress is a pretty hilarious deck, that i have won a vintage tournament with in this past.