[DOM] Teferi, Hero of Dominaria
This topic has been deleted. Only users with topic management privileges can see it.

Sometimes I wish Jace was banned or never existed. We'd explore other walkers so much more...

How is this remotely close to JTMS power level, even in context of certain matchups?

I think it's pretty straightforward. If you don't care about "untap two lands," than Jace is just better. If you build a deck that does (probably by running a huge number of counterspells), then this card is probably better in matchups where you need to keep your shields up at all times (Combo, Big Blue mirrors). It ultimates faster, too, and generates more value while adding loyalty counters than Jace does.

I don't really like the directions this card pushes a deck, but I don't think it's hard to come up with a scenario where you'd rather have this card than Jace

Believe it or not, you can play Jace and Teferi in the same deck.

I did and won today's MTGO Vintage Challenge.

Kudos, @Dr-J. You were spot on with your card evaluation. Almost everything you said panned out in my testing and in the Challenge.

@ChubbyRain Congrats. I watched the stream, and I noticed 1 thing everyone kept saying, "Teferi costs 3, not 5", which was a very valid point. Its not just drain, its fluster, swords, bounce, disenchant, snapcaster or containment priest. 2 untapped lands register a lot more than counterspell now. Very good job. Part of me wants to try green splash for claims, and flash green guys and sylvan library. Sylvan plus Search seems really strong.

@chubbyrain Congrats dude! I'm going to battle it out tomorrow with Teferi, wish me luck

Whoo, what a day. Just got home, it's a 3.5 hr drive each way between North St. Paul from Ames. Took 2nd in the tournament while packing Teferi.

@dr-j Hey I just noticed that you mentioned driving from North Saint Paul to Ames for Vintage. I live right in between those two points. Where do you play Vintage?

@kingleovold Hi-Score games in North St. Paul. They have a big monthly Legacy and occasionally Vintage. Where are you?

4-1'd with this list, splitting my matches against Brain Kelly. TMDers, Teferi is the real deal and singlehandedly makes me want to play Mana Drain again. In this Bomberman list, the ability to just randomly nuke a Stony Silence or Damping Sphere is a very powerful effect and something that was missing from the versions I played 5 years ago. Not saying this deck is perfect and there are certainly other ways for it to be built, but Teferi continues to impress. It's a top tier planeswalker on par with Jace, the Mind Sculptor and Dack Fayden. 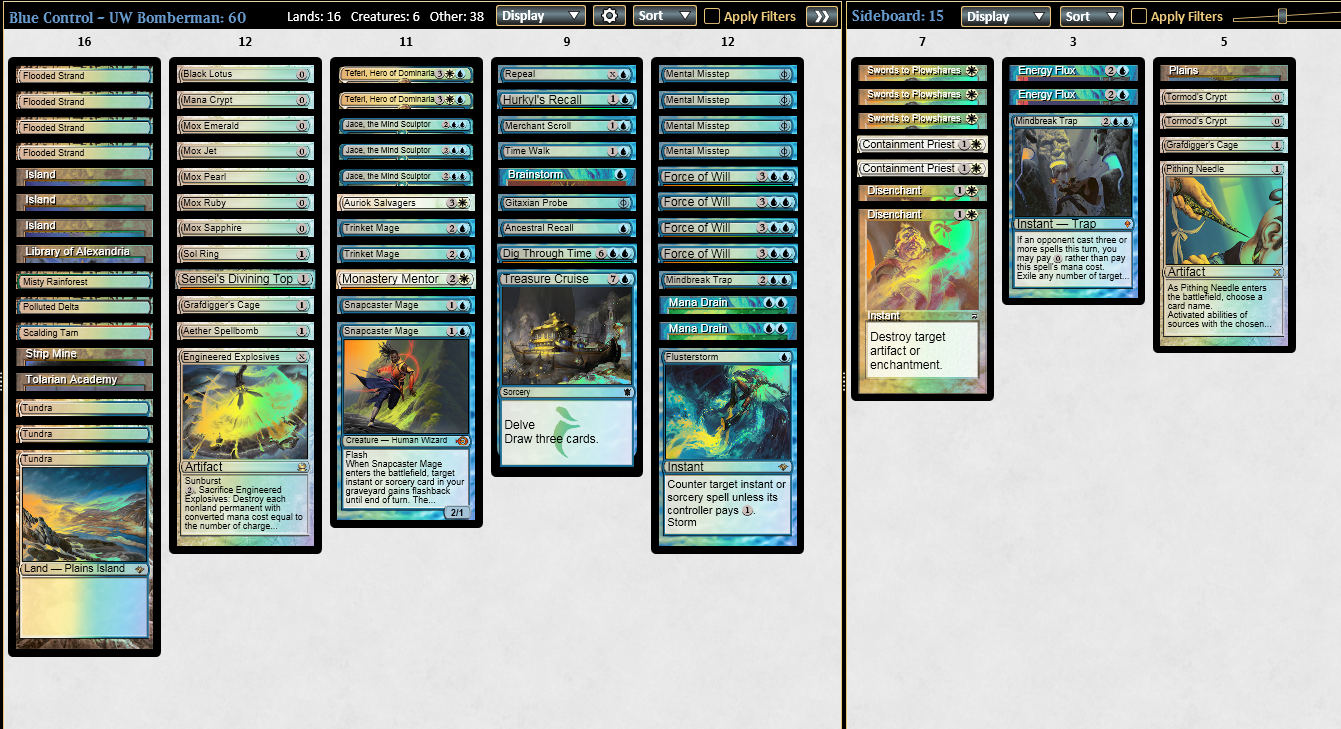 @chubbyrain Im of a very similar opinion regarding Teferi.

Regarding the above list, a Cavern would be a decent inclusion.

@nba84 The original Justin Kohler UW Bomberman list ran 2 Cavern of Souls over Library/Strip. I think you definitely want Library due to the synergy with Teferi. I could see cutting the Strip Mine for it but that's kind of a judgement call. If the format is more control heavy, it makes sense, but I think the MTGO scene has enough Shops and Dredge that the Strip Mine is better. From my experience (and Justin's), I don't think it's great to go down below the 14 Blue lands. You have a pretty difficult time UU/UW if you do that.

thing you always want to do. Living that one turn can also be problematic, given there's more of an aggro presence in Vintage than in his heyday.

I understand the pros and cons of Tezzeret - my point is more that Tezzeret's Cons are better than this card's Pros.

They go in completely different kinds of decks. Tez goes in a combo deck with a combo win. This would be better suited in a control style, 'draw go' kind of deck. Comparing them solely on their mana cost and then dismissing one doesn't accomplish much.

Just lost in the finals of a 26 person event for a Time Walk with your list from the challenge two weeks ago (other than some sideboard changes).

Teferi seems like the real deal, the removal ability is particularly potent, especially in a color combination that tends to have issues with resolved planeswalkers.

@crouchsnap Congrats on the finish!

A friend of mine reached the top 4 of a 22 person event for a Bazaar with that list this weekend, too.

Do you mind posting your changes and how your matches went? No deck is ever a final product and I appreciate any insight I can get.

I cut the tormod's crypts from the board for an extra containment priest and a council's judgement. I figured you were heavy on dredge hate because it's so prevalent online and didn't expect to see much. Judgement is kind of a pet card of mine. I tend to like sideboarding random catch alls, although after playing with Teferi he kind of already does the same thing, so I probably would skip it next time.

I beat a BUG landstill deck R1, got to tuck his Jace with Teferi at some point and drain a T1 standstill on the play off of a mox, Having sapphire on turn 1 feels pretty good in this deck.

R2 was U/R pyromancer, both games we traded a bit and I eventually won with advantage generated with a planeswalker.

R3 was PO, G1 we traded down to one card in hand each and I ripped Stony Silence and eventually stuck a Jace to win, the other game I won I hit him pretty hard with Energy Flux and beat him down with Snapcasters

Jeskai Mentor in the quarters, traded some countermagic over a recall and stuck a Jace and brainstormed into misstep for his pyroblast G1, G2 we both kept one land lotus hands and I Mindbreaked his turn 1 pyromancer and then untappped and resolved a Jace.

Semis was against the Librarian of Leng playing 2 card monte. G1 he sticks painter/grindstone and respects my open swords to plowshares bluff long enough to balance with hurkyl's up to get his stuff off the board and misstep the grindstone on the way back down with stony silence the following turn. Took forever to finish that game, I eventually Jace'd him with like 5 cards left in my library after getting poked at with helms and grindstones, and then still had to kill him with snapcaster mages because I had fewer cards in library than he did after the Jace ult. G2 I kept double stony silence triple force and one land and managed to stick a silence and then got to ult teferi and exile all of his permanents eventually. We had a gentlemen's agreement to allow him to cast demonic consultation so my Jace was at about 30 before he consulted for Slimefoot and conceded.

Lost in the finals to Jeskai mentor with Azcanta and sideboard Blood Moon, I mulled to 5 G1, still managed to stick a Jace but couldn't draw out of it and died to mentor, G2 I mulled to 6 and we had an interesting exchange where I Balanced to kill pyromancer with two lands and two moxes, my opponent on two lands and a mox, responds with Gush, so I force it, going to zero cards in hand and he topdecked preordain into land + azcanta after we were hellbent. Eventually died to a JVP emblem.

I dig the deck, it's got game against everything in the format and Teferi is a blast. I'm not sold on Azcanta, it feels like it's too cute and while the Teferi interaction is great, if you stuck a Teferi and untapped with it you're probably fine anyway. Might try JVP instead, or do a 1/1 split. It's also possible that it's correct to add red like your list that you smoked me on stream with a few nights ago, I feel like 4 basic islands might be a bit excessive anyway.