[M19] Infernal Judgment
This topic has been deleted. Only users with topic management privileges can see it. 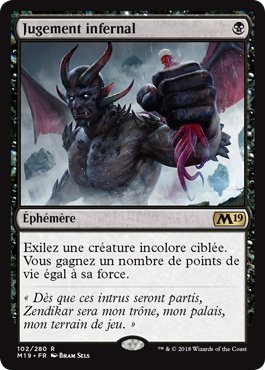 B
Instant
Exile target colorless creature. You gain life equal to its power.

I want some copies of this in the sideboards of all my Grixis decks immediately. Every part of it is relevant -- incredibly mana-efficient; it hits both artifacts and Eldrazi; it exiles (nice Hangarback Walker over there); incidental lifegain.

B
Instant
Exile target colorless creature. You gain life equal to its power.

If this is real, this is great.

Edit: Not much room for interpretation as the implications are pretty obvious.

@chubbyrain Card is playable. My only concern -- and I don't play enough Vintage lately to know if it's serious or not -- is whether a removal spell that addresses colorless creatures only is too narrow. Hitting all artifacts is broad enough to see play. Is killing shops creatures and Eldrazi but not other artifacts still broad enough?

@maximumcdawg I think the card is a clear role-player (1-2 copies) with an obvious home in BUG Fish. BUG Fish has a hard time dealing with Hangarback Walker, Eldrazi, Precursor Golem, and/or Blightsteel. In that shell, it also mitigates the life loss from Dark Confidant, perhaps shifting these decks away from the Xerox approach. I don't think you run more than 1-2 copies as it is rather narrow. With JVPs and Snapcasters, 1-2 copies can go a long way in the matchup. And of course this is contingent on the amount of Shops/Eldrazi. BUG Fish has enough answers to PO in Null Rod plus Leovold, so I can see the deck adopting a more narrow, yet powerful answer for a matchup that is more difficult and forsaking broader artifact removal.

To be fair, this hardly breaks the metagame or kills Shops/Eldrazi. It provides a color that lacked a great answer to certain cards with such an answer. Maybe it wasn't as obvious as I thought. I tend to make too many assumptions...

This card is awesome. Will certainly see vintage play. Better than almost all artifact removal in some lists.

I hope the card is a true one (black is notoriously bad at dealing with artifacts) because a black sword to plowshare is just a living dream. However, i agree the card is quite narrow but will definitively see some play.

Agree that this card is a winner. The set of decks that want this is fairly small, but it does what it does better than anything else in those decks. Not bad!

I want to change my opinion on this card. It isn’t awesome, it’s a total game changer for Vintage.

Foundry Inspector fundamentally changed workshop from quasi control (also the restriction of spheres helped) to the most agro creature deck in the format.

What’s good vs Agro creature decks, 1 mana removal of any target AND lifegain.

This card is a game changer.

It also gets players to be either 1) greedier in the mana bases 2) off of jeskai mentor and in favor of Leovold, grixis, and even esper.

Wow Black has traditionally not had a lot of tools to deal with artifact creatures, it's just Snuff Out and Dismember? This feels like an upgrade.

last edited by
B
B
benjamin_berry Reply Quote

I’d also like to point out it hits factory, mutavault and nexi.

The lifegain really makes this card standout even when splashing for swords is an option.

I cannot regard this as anything but a sideboard card, but this is ridiculously out of the blue and honestly kicks the color pie right in the jimmies. It will change post board matches for sure. Ravager players are going to need to be really careful how they sac from now on.

@hierarchnoble Personally, I don't think "artifact creature kill" is out of flavour for black (or the life gain for that matter) so much as the fact that the card exiles the target...

There are other, earlier examples of black creature exile as well. The earliest example I can find is (93/94-legal!) Ashes to Ashes, but there's also Eradicate, Gild, Sever the Bloodline, and Silence the Believers. (And in more recent sets, Hour of Glory and Reaver Ambush.)

To me this is out of flavor because A) it explicitly targets artifact style creatures which has not been blacks strong suit and B) it is undercosted life gain. Draining effects have typically been reserved for things that are thematically alive, which is why so many of blacks old cards could not target other black cards.

Blacks claim to fame for a long time was being able to do basically anything except deal with enchantments, and do it pretty cheaply, but with another cost associated. Compare this to other black removal spells like Vendetta.

Destroy/exile target colorless creature was more a matter of time (and eventual need), rather than a restriction imposed by the color pie. As for gaining life, I know we focus on Eternal Formats, but R&D does not. People might think this card is designed for Modern or Vintage or Eldrazi or Shops or whatever, but that's unlikely to be true. Standard has been dominated by aggressive decks centered around Vehicles, Bomat Courier, and Scrapheap Scrounger since Kaledesh. Heck, I don't know what the timing was, but it's possible Smuggler's Copter was still unbanned then. The life gain supports this card's function as an answer to these aggro decks. Adherence to some arbitrary notion of a color wheel is likely secondary to printing functional answers to existing problems in the Standard format.