[WAR] Ashiok, Dream Render
This topic has been deleted. Only users with topic management privileges can see it. 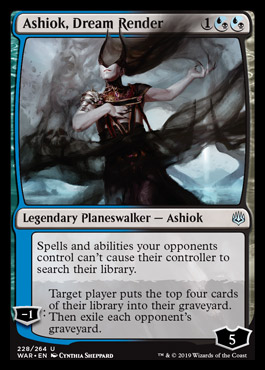 So in carrying on this set's theme of slightly bonkers uncommon PWs this seems to hate on:

Casting cost is non-prohibitive. Clearly dead against Shops. This seems like keenly wicked hate, but that said, which decks want it most? Main or side only? Is this another Win More kind of card like others we've seen in this set? Given how everyone here just loves asymetrical hate...

Note that you can self mill yourself with this but then it exiles your opponents cards. Could be something to that.

This card is scary in that if you can lotus/2 mox and a land it out turn one your opponent blue or dredge opponent could actually be shut out of the game.

I think this is main deckable, because the lists that would run it most likely have a way to use it for other effect. Against shops you can pitch it, and blue can brainstorm it away if need be.

If this were to become a prominent player in the format along with the new teferi and a few of the other walkers we have seen we may be looking at a VERY different vintage. We now have a very good counter spell hoser, a very good graveyard hoser, a really good Fetch land hoser, and thats just 2 cards.

This card is not maindeckable - it's incredibly narrow in its applications and pitching to Force of Will is not enough utility to run it.

It's generally too slow to lock the opponent out of Fetches.

Survival, Blue, and Dredge can play around the sorcery speed exile most of the time.

Vintage is too fast for this card. It has applications for Modern though.

There's probably some sort of Bazaar, Thoughtscour, or Tasigur shell for it, too.

I know saying this is anathema to the format but combining mill and exile makes me think this is one of the more viable mill cards ever printed. This card alone in half a deck in limited formats which is insane, but still its a 1/3 of a deck in constructed formats that have far more velocity.

As a tool against dredge it keeps them off actually dredging, presumably it would be in tandem with other hate cards, but could actually be enough combined with how they have to cycle cards to flat out win the game.

Milling is typically not considered good because you may actually be powering up graveyard strategies, but this does not do that and has decent chances to actually mill relevant wincons and singletons from a persons deck over time. Still has risk of course but I would not be suprised at all to learn of someone winning off mill with this in the future.

But the best Delve spells are restricted, you are warping your deck around a 3 mana planeswalker not named Dack Fayden, your deck would be incredibly vulnerable to Leyline of the Void and Rest in Peace, Bazaar makes this card really difficult to cast, Tasigur has diminishing returns in multiples and is vulnerable to Karakas, Gurmag Angler is embarassed by tokens, and Ashiok is 3 mana to go down a card and not impact the board in a meaningful way.

I mean, I did stream a UBw Bazaar Xeroxish list with JP Kohler and brew a Grixis deck that I tested but didn't stream, so it's not a crazy concept in my opinion. This card just doesn't add anything in any way, shape, or form to the idea. People always overestimate the effect of "hate" in evaluating cards. This is just another example.

This is on the lower end of power for 3 mana walkers, of which we have a plethora of, but it has its niche. I think this is probably the best aven mindcensor effect, and Aven Mindcensor itself is 3 mana, and did see play at one point.

Added on to that effect is a Bojuka Bog every turn, which while isn't destroying a deck by itself, can put a serious road block in the way for a deck like Dredge or Storm.

Added on to that effect is a self mill for 4 every turn. There are limited playable Delve spells, but there are still Snapcasters, Baby Jaces, Yawgmoth's will and other cards that want you to fill your GY. Clearing off the top 4 is also synergistic with Sensei's top, JtMS, and other effects that put known cards on top.

Anyone that wants these combination of effects can turn to this card as, probably at most a singleton, in the main deck.

Its like they want to turn hate bears into planeswalkers all in a single set.

@vaughnbros But these effects, even in combination, aren't enough at 3 mana, 2 of which are colored. It's just so slow, vulnerable, and doesn't do enough outside of specific contexts. Can you imagine how poor Dack would be if instead of looting it had self mill?

I also love how "Anyone that wants the abilities on the card can play the card" is some how insightful... Do you have specific lists or archetypes in mind that would like to play the card? Do you have decks that could be built around it? Even though I disagree with @TheActualSaturn's take, I'm glad he made a suggestion.

Isn't this just better than the 2nd Kaya in your junk decklist?

No, the Kaya is a finisher, removal spell for moxen against PO and other DRS (it's come up quite a few times), and life gain to help fuel Bob and Sylvan. Ashiok is functionally none of those things.

You want to build a deck that can harness Ashiok as an engine, and anything else is supplemental.

If you're playing against Dredge, and you have Ashiok main and can land it game 1, it's probably too slow, but it could very well turn the game around. (Note: You can play Ashiok off only a Black Lotus, unlike Dack.)

If you're not playing against Dredge, I think you want to be piloting a deck where -1 Ashiok, targeting yourself has the effect of either drawing cards (Yawmogth's Will, Snapcaster, Ramunap, Life from the Loam, etc) or powering Delve (Treasure Cruise, Dig Through Time, Tasigur). You are gaining resources (and knowledge about the remainder of your deck), and hindering your opponent.

For comparison, Bazaar moves 5 cards (2 from library to hand, and 3 from hand to graveyard). This one moves 4. It's not a land, and you likely won't play it on turn 1, so it's clearly not as powerful on the two axes, but it does give us some insight into it's raw max potential. I figure it's somewhere more than 80% of Bazaar. It has two upsides, pitches to FoW, soaks up damage, and doesn't take up a land slot.

I still debate with my friends how much Treasure Cruise or Dig Through Time should cost to be "fair," but they both just got cheaper by four mana. And we already know Yawgmoth's Will and Snapcaster are both busted.

Ghost Quarter just became Strip Mine, and Ghost Quarter has seen play in Vintage. UG could make this a thing. UB & BUG? Probably not. I don't think this is a real point, but I wouldn't be surprised if someone tried a thing.

@theactualsaturn Ghost Quarter and Field of Ruin don't work, because they aren't an effect the opponent controls.

I love this card and think it's not as slow as people think. Turn 1 land, mox - turn 2 land, Ashiok. It's not like Vintage is a format without a crapload of moxen, and this can work off jet OR sapphire OR two lands that produce blue and/or black + ANY moxen. The turn 1 on lotus is going to be rare...but if you drop this thing turn 2, the opponent is still stuck with multiple fetches and dead tutors.

Good point about Ghost Quarter. Field of Ruin depends on who activated it, but I won't be running either now!

I'm pointing out Kaya mostly because "Its not Dack" is just about the silliest argument against this. Its like all the people that yell "Its not JtMS" for every 4 mana walker. You are better than that.

This feeds your DRS/Tarmogoyf, mana denies any Fetch lands your opponents play later in the game, shuts down game ending spells like Tinker/Dark Petition, stronger hate against Dredge as it nukes their entire yard (when combined with DRS or Wasteland should be game ending). Kaya is the latter, but that's it. If you don't want to play it that's fine, but it serves similar value across a number of matchups as these other 3 mana walkers. I can understand Kaya #1 being better in that list, but drawing this instead of a 2nd Kaya would be a benefit towards fueling Kaya's ultimate.

This is also playable in Landstill (or any other wasteland based control) the 1-sided Mindlock Orb effect against storm and -1 is very strong against Dredge. Both abilities play well with any strip effects, e.g. Wasteland/Ghost Quarter/ect. Her -1 is also synergistic with Crucible. It is highly matchup dependent though so I don't think this is a make or break card for these decks.

@vaughnbros This seems pretty baller WITH Kaya, as Ashiok essentially exiles 4 a turn if you target your opponent, and Ashiok hits your opponent's whole grave the turn you play it. That seems to make Kaya's ultimate deadlier than it already may be.

@vaughnbros I'm not making the "Dack/Planeswalker Gambit" TM. I'm making the argument that self-mill is overrated. Weren't you testing with us when we were trying to make Thought Scour work while Dig + Cruise were still legal? The problem was that you had trouble finding or resolving the cards that converted the self-mill into an advantage and that's why Preordain and Probe ultimately proved better.

Landstill can't beat Dredge, certainly not with this card. It had a sub-20% match win rate already, lacks Moxen to accelerate out expensive hate, and generally struggles to deal with even a couple creatures from Dredge. The last thing it needs is a 3 drop hate-piece that dies to a single Hollow One attack.

You can try it as a Prison card but it's pretty expensive at 3 mana. Or run it in a UB Turbo/Depths Lands shell where the self mill can find Life from the Loam and Bazaar and cast it off Urborg. Just remember (as others pointed out) that it doesn't work with Ghost Quarter.

I agree that self mill alone isn’t good, but self mill is the worst portion of the card text. Mindcensor w/ sorcery exile are its primary abilities. It does all 3 the first turn you play it.

Sorcery GY removal isn't even good enough against Dredge or Survival and can be played around easily.