TSI Hazard's Birthday 5.0 2/8/2020 Results!
This topic has been deleted. Only users with topic management privileges can see it.
N
N
nartman99 Reply Quote

We had a few cancellations but still ended up with 30 people for the 5th annual Hazard birthday Team Serious Invitational!

The Drinks! (forgot to take a picture so this is the morning after) After 5 rounds of swiss, the top 8 played out as follows:

Congrats to Jason Jaco for being the first person to have won 3 TSIs!

Here are the top 8 lists based on final standings:

Thanks to everyone that came out! Thanks to Hazard for hosting us and happy birthday!

Thank you for posting the results.

There was one in between (won by David Lance), don't remember if Brassy was there or not.

@ten-ten It was Sam Krohlow's list: I played it on stream too, it needs some work, but still feels powerful. 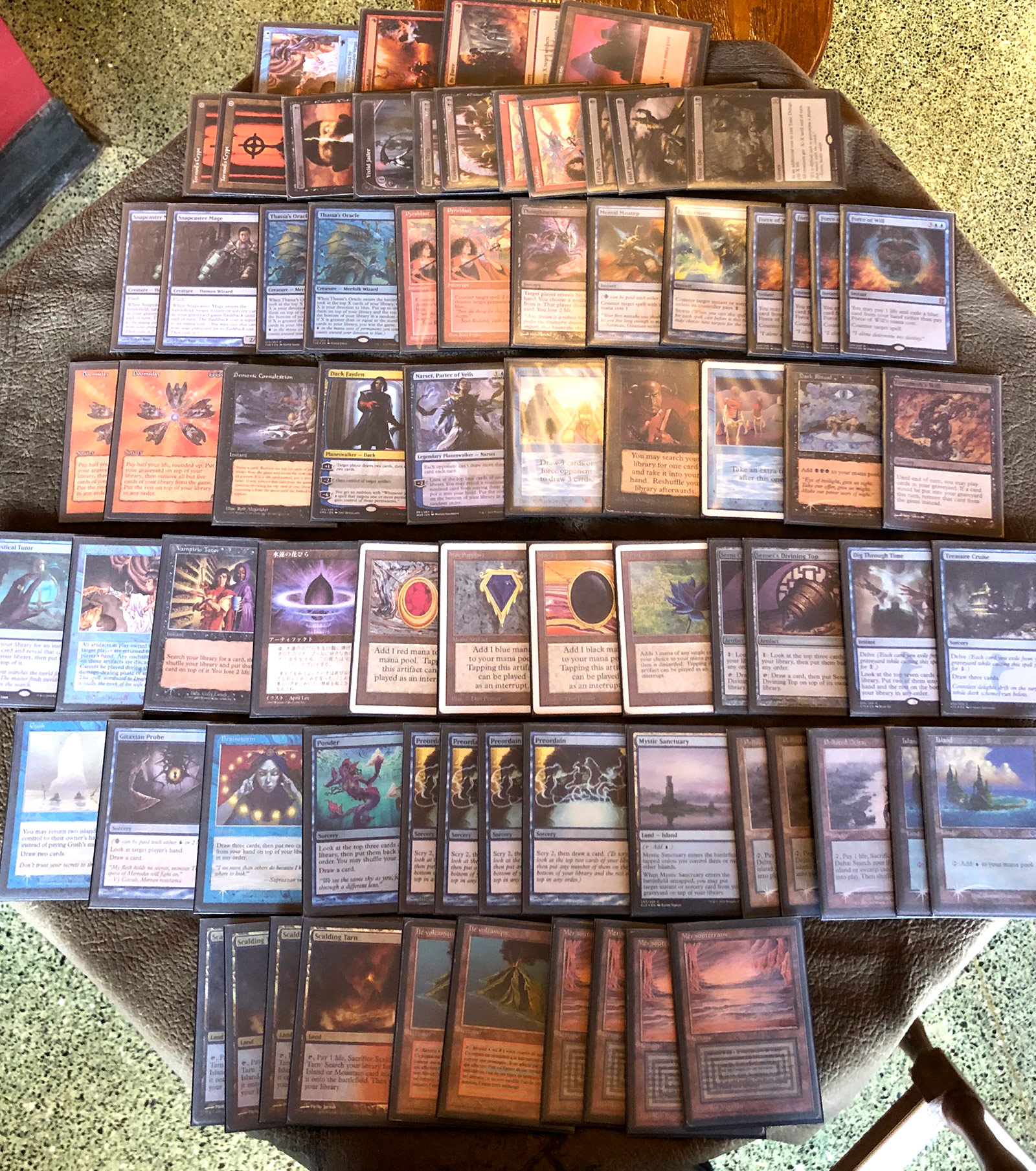 @13nova
Thank you. I really appreciate it.

I vaguely remember tuning in on one of the games where he could've won on the spot but passed the turn.
Internet Service was horrible for me and the stream would freeze, so, I ended up coming back to it in time for the final match, Jaco v. Brass man.

Do you plan on doing a write-up of any kind, or update of sorts, on the new Doomsday?

I would really appreciate a write up/Primer as well.

Actual Doomsday list (the pictured maindeck is a couple cards off and the sideboard is not close):

The deck was really really powerful but I'm bad at magic now so I messed up a bunch. Should have easily won one of the matches I lost (it was on camera after the regular R3 or R4 match), probably could have won the others as well if I'd played better or mulliganed better.

List/board are 100% Sam Krohlow, his advice was basically to play like a control deck most of the time. Don't try to go off unless you're sure you got it (or, you know, you're about to die). I went off T2 maybe twice (mostly with DT -> Lotus -> DD -> free draw spell) because i had to, but otherwise most games didnt end until turn 6 or 7 at least.

Notable is the zero mana stack with top in play: gush/lotus/ancestral/oracle/petal (or sapphire): tap top, gush for lotus/top, lotus -> UUU, play top, tap draw, ancestral, U floating, 0 cards in deck, petal -> oracle. I won with that pile a couple times, including once on T2 facing lethal.

Personally i hated the shattering sprees in the board and wouldn't play them again. I'd try either an instant or another hurkyls or something. And I wouldnt mind having one more bomb maindeck, either another DD or maybe a tinker type effect or something, I had some games where I was clearly ahead but strugged to close out.

@lhc
How often did you win just by setting up Consult/Oracle?

@lhc
Thank you for that.

I think you would also just, like, forget to cast Doomsday sometimes.

That's not true. I remember a lot and can watch the rest on Twitch. I also remember the match that had 30 minutes of shuffling.

The videos from each round are also up on YouTube under the Serious Vintage channel. Check those out: https://www.youtube.com/watch?v=GH-ba9DN4YQ&list=PL3klcfmNMPqH5nH3w4bJV3RIdUoZSOKMx

@grandpabelcher the ones I see on twitch are the same as the YouTube videos? I thought I’d see more videos on twitch.

@ten-ten The full video (almost 10 hours of it) should be available on Twitch. Not all of it is chopped up, though. If I get time, I'll try to pull out other sections.

@ten-ten I guess the full video is no longer available on Twitch. They only keep it for two weeks if you're not an affiliate. C'est la vie. Enjoy clips on YouTube. I think there's still some fun commentary about Cats, the movie.

@grandpabelcher no problem at all, thank you.