[M21] See the Truth
This topic has been deleted. Only users with topic management privileges can see it.
E
E
evouga Reply Quote 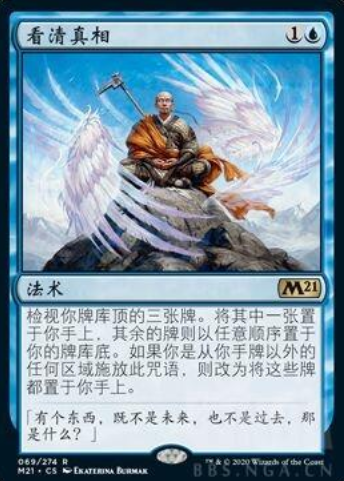 How good does a 1U cantrip need to be to see play in Vintage? Telling Time is unplayable but it's not farfetched to imagine casting this thing easily and often with Snapcaster Mage, baby Jace, Underworld Breach, etc. (Of course Brain Freeze is much better once Breach is in play, but See the Truth both helps you find the Breach and then has a massive payoff once you land it.)

This is fringe for me. I don't think you ever want to play it normally, so it would likely need to be in a list with snapcaster, bazaar, Dack, something like that. Even then it is only going to be like the 3rd or 4 best draw spell in your deck, and it's many hoops to jump though.

I think in other formats that have Red/Blue storm combo deck with snappy this is a Slam dunk home run of a card, but Vintage has too much good stuff already.

There's an important word missing from this card, though, that gives its functionality in many common situations: Draw. This is not card draw so it sidesteps effects like leopold and narset, parter of veils (and the no-longer played uba mask).
It will see play - maybe not a lot. But I think early on it will appear in a few decks.

I don't see a place for this in Vintage at the moment. I think that it has potential to become an engine card in Legacy with Shardless Agent and the Cascade mechanic. It also may be efficient enough to see play in Modern paired with Chandra Torch of Defiance's +1 or even in a Prowess shell with Light up the Stage.

All of that to say I don't think that planning on getting access to the 'draw 3' mode by way of flashing it back from the 'yard is going to be efficient enough and that if it gets broken it will be by effects that let you play cards from exile or the top of your library.

I'm not following the metagame closely enough to make any strong claims, but I think people might be underestimating this one. A draw 3 is more than twice as good as a draw 2, and we don't even have a 1U draw 2 in the format. The unenhanced mode is pretty comparable to cards that have seen competitive play before (Impulse, Strategic Planning), and the cost to kick it is almost trivial between Snapcaster, Breach, Will. You kind of have to build around it, but I think the cards that you need to run to turn this into a draw three are much better than the cards you need to run to turn Standstill into a draw three. That said, I don't know if the field has a place right now for a late-game control deck like that.

At the very least this should take Night’s whisper slot in PO. Plays well with Bolas’s Citadel also.

I agree with Andy. Its normal use is the kind of thing we see approximated by often-played cards and the normal mode can help you synthesize the kind of set-up required for the Draw 3.

It has potential. It doesn't require pairing with any independently bad cards and its cost is low enough that it doesn't need cumbersome gymnastics.