[JMP] Allosaurus Shepherd
This topic has been deleted. Only users with topic management privileges can see it. 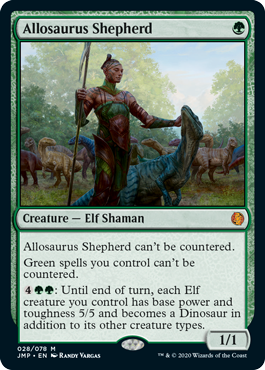 Have at it. Note that it is green SPELLS you control, not just creatures. So elf tribal can have 8 cavern of souls effects now. I actually think this may be enough to make elf tribal or elf combo a thing.

This also isn't just for Elves. Its ALL green spells. Channel, and Natural Order are the best cards that I can think of breaking with this.

This also isn't just for Elves. Its ALL green spells. Channel, and Natural Order are the best cards that I can think of breaking with this.

right now I'm wondering if you even need bother with those. Maybe natural order can fish out a finisher like craterhoof but I was also just thinking straight elf ball.

T1 cast this, maybe mox emerald or Elvish spirit guide into a llanowar elves. Turn 2 Glimpse of nature, heritage druid, play out as much of your deck as you can, play Shaman of the pack to win.

Right now looking at what the format consists of I'm not sure any deck is ready to handle a deck that can't be countered, is as fast as dredge without needing the graveyard, and can produce huge amounts of mana and run Force of Vigor x4 that is pitchable to everything in the deck.

What about using this in a non-combo shell that is more aggro control oriented? A 'cavern of souls' on a stick, in addition to the actual Cavern, to make sure you a) have a backup and / or alternative plan with Cavern, and b) cover your non Human spells (non-creature or creature).

I like how Assassin's Trophy gains the abrupt decay feature with Shepherd.
Uncounterable Ouphe T2 can be huge, same for Teeg
GSZ, OuaT, Oko, FoV ... plenty of good stuff

To me this seems like an interesting value bear.

For a value engine only deck such as BUG, I dont think this card is good. Any time you would want this in those shells, I think Veil of Summer is better. Providing uncounterability is strong, but it is just a 1/1 after that, veil is "hidden" in hand and cantrips.

Elves is the ideal shell because this card synergizes with most of the other cards in the deck (heirarch, birchlore, symbiote) and the haymakers that deck plays are extra vulnerable to countermagic (natural order).

Just to play devils advocate, elves gets wrecked by Pyroclasm more so than Force of Will.

Just to play devils advocate, elves gets wrecked by Pyroclasm more so than Force of Will.

I cannot remember the last time I saw pyroclasm in a list, and it is sorcery speed and I think this enables you to beat that.

I'm actually trying to figure out what the most broken things this would enable right now and having trouble limiting it to one configuration.

Elves gets absolutely shredded by Walking Ballista, and also loses to other decks just being faster / more disruptive. Elf ball is like a turn 3 or later deck that gets pushed even further in the face of disruption/bad draws.

I think the card is way more interesting if there is an application outside of Elves.

Elves gets absolutely shredded by Walking Ballista, and also loses to other decks just being faster / more disruptive. Elf ball is like a turn 3 or later deck that gets pushed even further in the face of disruption/bad draws.

I think the card is way more interesting if there is an application outside of Elves.

I'm unclear if that paradigm holds up. If elves gets a reasonable hand and start on the play, shops basically has to resolve the ballista turn one to kill any enabler or elves could snowball in one turn. Even without Glimpse it is not unreasonable for an elf list to put down 2 lords and be out of range.

Yes it's a good tool but since green is already Shops natural predator I think they are very well positioned after sideboarding as well to just ruin that decks day.

The deck doesn’t play Lords... You’d have to significantly alter the list, making your combo element slower and/or worse, to support that. Deck probably already needs to find room for Ouphe and Blue power to be remotely Vintage playable.

I do not think I would base my build for vintage on a 3 month old Lurris meta 4th place deck that also did not have the above card.

Would you care to show me what elves deck you are talking about then? Because this has been roughly what Legacy Elves has looked like for some time. I can't recall a time when they ran a multitude of Lords, at most they play like 1 or 2 to GSZ for.

Legacy elves doesn't play force of vigor or ouphe main decked because they don't answer half the meta... Apples and Oranges.

I don't think a vintage elf deck would look identical to a legacy elf deck.

I don't think a vintage elf deck would look identical to a legacy elf deck.

I mean, no deck is going to look the same now that it has an uncounterable threat that makes your deck uncounterable. It would be silly to think the ideal build is just take a legacy deck and put 4 of these in.

Years back I played an elf list in Modern that could turn 2 with some luck and very consistently put the deck into play on turn 3. Obviously a lot of the cards were meta calls for that format but the core of is still there. What does exist now that didn't exist then however is a 2 mana elf lord (elvish Clan caller), a 2 mana null rod creature that cannot be countered, a pitchable double shatter, and much more.

The paradigm has shifted though, In vintage I think your ideal opener is not necessarily going to be a mana elf like it is in the other formats, it will be this guy and fast mana rock for another thing and you are going to hope to go off with Glimpse and druid turn 2. It needs some crafting and I am waiting to see what else this set may be hiding, but I think this elf is a huge deal.

@tittliewinks22
There are a lot of other deck ideas that use aggro control strategies than just BUG.

Dosen't deafining silence prevent you from getting back vengevine?

No it won't. Deafening is actually very strong in Survival since all you are doing is casting 2 creature spells.

Another home would be 5C Humans, the controlling value versions or the Knight Humans which usually goes for prison and sticks with GWx colorwise.

It does not have to be all about combo, but I can see it being very good in a combo deck as well.

Bah, ots early, thought it was rule of law for a sec.

@guli it isn't a human though