PAX Vintage Champs - 2nd Place with Hogaak
This topic has been deleted. Only users with topic management privileges can see it.

I made it to the finals of this past weekend's PAX Vintage Championship. This online event consisted of six rounds of Swiss with a cut to Top 8. In order to qualify for the event there were a series of $25 qualifiers, roughly two per day, where you needed to achieve a 3-1 record or better.

Since Krark-Clan Ironworks won the September 12th Vintage Challenge, I decided to load up a build of Hogaak that ran maindeck Collector Ouphe for the PAX Vintage Preliminary the next day. I pulled off an easy 3-1, 6-3 in games, with all three game losses being to Dark Ritual decks pulling off turn 1/2 kills. It was nice (and cheap!) to qualify on my first attempt. This was the build that I used:

Happy with my performance, I sat tight and waited for a week to pass. During this week Zendikar Rising was released, and with it people were brewing Goblin Charbelcher decks running Sea Gate Restoration, but nothing else really changed. Happy that Collector Ouphe was a tool against this new menace, I registered the same 75 for the Championship.

My matchups lined up fairly well, and I managed to push through the entire tournament without ever facing the Dark Ritual menace that bested me during the Preliminary. My matchups, records, and the decklists of my opponents were as follows:

At this point I'm 5-1 and locked for the playoffs. I send out a celebratory tweet.

It was heartbreaking to not be able to exact my revenge from my Swiss loss, but Jonas (unicornparadise) piloted his deck very skillfully in both of our matches. The pivotal moment was the start of game three, where I kept a "cheese" hand on the draw that could make double Hollow One double Vengevine turn one. I had to fade Sorcerous Spyglass and Trinisphere. He had both.

A full breakdown of the top 32 decklists can be found on MTGGoldfish.

I'd like to thank the Vintage Streaming Community (Free to join, and harkens back to TMD's mIRC days! https://discord.gg/2eVcsjK) on Discord for their moral support during this event. It's nice to have a vibrant online Vintage community to bounce ideas off of and become a better Vintage player, even over a decade into my Vintage career. Special thanks to Justin Gennari (http://www.twitch.tv/iamactuallylvl1) and Anuraag Das (http://www.twitch.tv/anzidmtg), who both streamed their side of the matches live.

I don't have a celebratory picture since this was an online event, so instead I leave you with a picture from this time last year from The Bearded Dragon's Mox Pearl event. I'm still crushing with Hogaak, Arisen Necropolis over a year later. 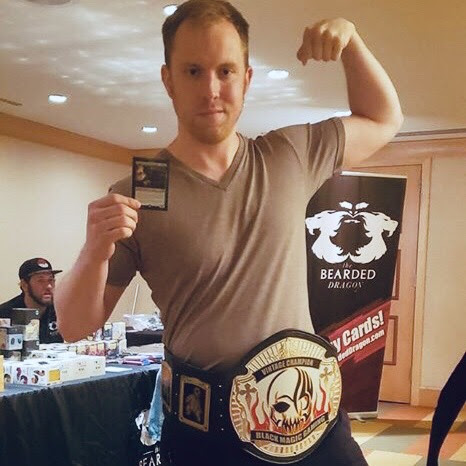 last edited by
B
B
Botvinik Reply Quote

What are the general mulligan rules for the deck?

What are the general mulligan rules for the deck?

The best heuristic I can come up with is "have a plan". Oftentimes the strongest plan is Bazaar of Baghdad, but that doesn't make this a Mulligan to Bazaar deck. There are many, many lines, especially ones involving Stitcher's Supplier and Once Upon a Time, that can still lead you to powerful starts. Remember, Stitcher's Supplier on turn one sees more cards than Bazaar of Baghdad on turn one. If you're looking at a hand with a bunch of cheap creatures and a Hogaak, see if you can map out a quick line to casting that Hogaak. Don't be afraid to lead on Deathrite Shaman, cycle Hollow Ones, or pitch Vengevines to Force of Vigor to play a more Fish-style game rather than try to go for the nuts every single time. During my finals run I only had the "cheese" hand (Bazaar, two free creatures, one or more Vengevine) three times in nine matches, and one of those times the cheese didn't even pay off because it was too fragile.

I'm not a content creator, but my friend Justin Gennari is, and he has five five-match MTGO leagues with the deck to showcase some gameplay. I didn't vet these, but oftentimes when I watch him play he explains his opening hands and other thoughts very well. Here are the links to the YouTube playlists when he played the deck in early July, with 25 videos of full matches:

Please let me know if you have any other questions!

As I had mentioned in the other thread, I really like a couple of Basic Forests and Hermit Druids over the Stitcher's. It's a little bit slower, but activating a Hermit Druid once or twice is much more impactful than just milling 3 cards off of the top. Without the Hermit Druids, I felt like I had to mulligan aggressively to Bazaar and that kind of doesn't feel so good.

Other than that when I was seriously working on this deck like about 6 months ago, I came to a very similar deck build. Sideboard was slightly different, but that always seems like personal preference. Veil of Summer specifically was a fun card to push through a big turn against control decks.

The one other thing that I've played around with is a splash of blue (instead of white, or whatever other color for SB cards) since it gives you Time Walk and Ancestral.

I have also been playing around with a blue splash in this deck, and it has felt pretty good. The big issue I've found is really that the deck is already so streamlined. There's like 2-3 flex slots in the entire deck.

Stitcher's is one of the best cards in the deck imo, I don't love putting in a replacement that has summoning sickness and requires to be tapped so you can't use it to cast gaak. I do think that mulling aggressively to bazaar is a trap. Bazaar is the best card in the deck, but it isn't needed in every game.