It looks like this is a good time to dig out my MECCG collection. But seriously, I am concerned more about how much damage MtG can do to the LotR franchise rather than how the LotR franchise can affect MtG. MtG will be just fine. 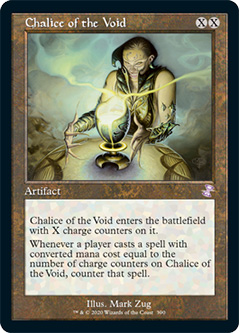 What a beauty! I hope that this year we will see many of the Vintage staples reprinted with the old frame.

Arabian Knights is set worth collecting because of the artwork and unique vibe of the set.

The name of the set is "Arabian Nights." This set is named after a very famous collection of middle eastern folk tales known as "One Thousand and One Nights" aka "Arabian Nights." That is why there are characters in the set such as Scheherazade, Sinbad, Ali Baba, etc.

My newer iterations use enlightened tutor and maindeck RIP, arcane lab, energy flux(sometimes stony if I expect more PO), and of course back to basics. I have found this silver bullet approach to be very effective vs a variety if unfair decks and BTB cripples most "fair decks" to the pont where I don't feel bad about mainboard enlightened tutor.

Just curious, since you like 3CMC blue enchantments, what about Propaganda?

@griselbrother said in How do you beat W&6 with fair hatebears?:

I remember you played that green enchantment that gives your creatures shroud at some point (I forgot its name) - perhaps that's something to look into again?

A fun fact, with Painter's Servant on Green, all your spells are uncounterable.

I agree with @Rat3dE . I can't speak for everyone who runs The Tabernacle at Pendrell Vale, but it's a reasonable choice in specific matchups. Like you said, the HollowVine decks don't run a ton of mana to support a Tabernacle, but you'd bring it in only against decks that are even less equipped to handle it.

It looks like partially The Tabernacle is a response to a specific metagame. Is this still the case now?

I don't play online and very irregularly play in paper so my knowledge of the metagame is quite outdated. Nevertheless, I was under impression that Dredge is getting leaner and meaner as a response to fast combos and mid-range controls, not to mentions thanks to new forces (let the force be with us).

I noticed that in the Vintage Challenge #12130342 Dredge and HollowVine 6-1'ed. It would be interesting to hear from the players, but I have no idea if PTarts2win or WingedHussar has a TMD account.

@Chronatog It is because the deck has such a terrible Dredge matchup that you need Tabernacle to try to even come close to winning from my understanding.

I see your point. It makes sense to have The Tabernacle instead of Leyline of the Void as Dredge was blessed with Force of Vigor. And Tormod's Crypt and Ravenous Trap are not good enough as Dredge now has more blue Forces.

However, Ichorid doesn't need Dredge to cast anything and Vengevine needs two creature spells. So while HolowVine is putting its act together under the Tabernacle, Dredge just punches into the face with those hasty Ichorids and episodically summons Ashen Rider to take care of the holy ground's protection or Flame-Kin Zealot to accelerate the assault.

From this perspective would it be more efficient to use Leyline of the Void as a more proactive/preemptive defense rather than Tabernacle that may quite passive and a little bit too late?

HollowVine also has blue Forces so while Dredge is looking for Force of Vigor plus a green card, the time HolowVine buys is critical in gaining a slight advantage over Dredge.

I can be completely wrong as I don't play much these days, but I am still unconvinced.

Some variations of HollowVine play The Tabernacle at Pendrell Vale. Since the deck plays only a few mana sources, the inclusion of the Tabernacle is counterintuitive. Other than supporting a strategy using Vengevines for an alpha strike, what are other reasons for including the Tabernacle?