Holy moly! 8 hours of podcast! Looking forward to this one.

Doesn't do enough extra to justify the extra cost, IMO.

In matchups where you need Cage, you need it in play ASAP, ideally while simultaneously layering additional hate cards or answering additional threats like Hollow One that Cage doesn't answer. Paying an extra mana for Cage is not compatible with these plans.

And then the opponent dropped Workshop+Ensnaring Bridge?

We’re on a long tangent away from the Lotus, but it’s an interesting question how widely Vintage decks would replace duals with “painless City of Brass,” if that were printed.

My guess is that in many decks the fetch lands and duals have value beyond mana fixing (source of shuffling; wasteland resistance; fuel for Gush and Mystic Sanctuary, etc) so that the duals would still be heavily used.

I haven’t been following the details, but FYI the winner was apparently disqualified for bribery, so that the second-place player (playing shops) now won.

This is a poor ruling band-aiding a sloppy templating mistake, IMO. If you don't have a Commander, clearly there are no colors in its color identity.

I highly doubt people will actually pay 17-19 lives for this on turn 1. You'd need a god draw with 3-4 mana floating after the wheel to have a somewhat reliable kill. If you don't win that turn, you're pretty much dead to anything.

You can also cast a mini-Tendrils to gain the life needed to cast the second Wheel. Presumably you are running the Wheel in a TPS shell (since if your deck is based around artifact acceleration only, PO is just better than even a one-sided Wheel of Fortune, no?).

They are definitely replacement effects:

The real question is whether they are self-replacement effects:

So: we will get an official ruling before the set releases (including, potentially, clarification in the comp. rules themselves) but right now I'd bet on the controller of the permanent choosing whether it enters tapped or untapped.

I'm buying 4x (maybe 40x). They printed Companion last set and I hear they are printing Commander as a Vintage type in Kaldheim. Can't wait!

Seriously? Source on this?

This card has no Vintage implications, but is a notable printing nonetheless as the closest replica yet to MtG's most iconic card: 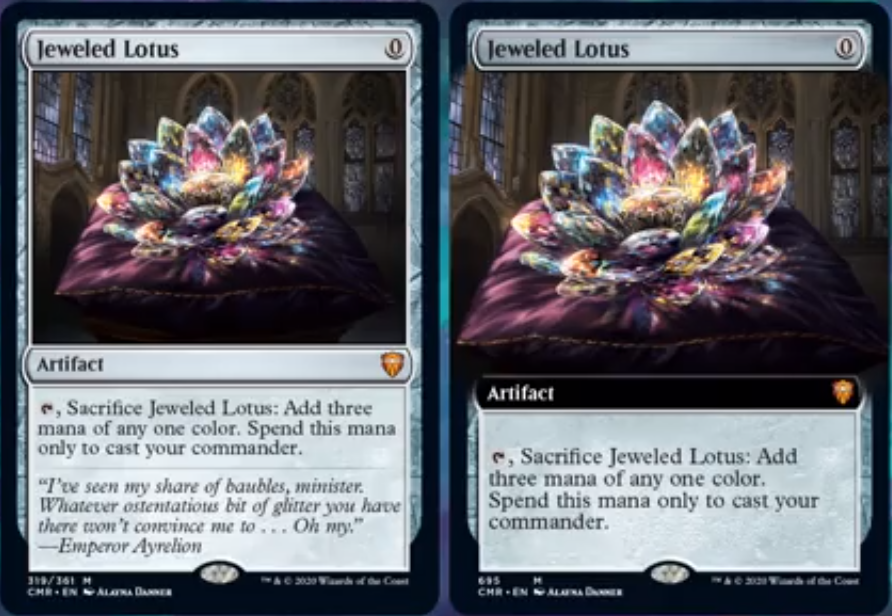 Jeweled Lotus 0
Artifact
T, Sacrifice Jeweled Lotus: Add three mana of any one color. Spend this mana only to cast your commander.

I don't play a lot of Commander, but naively I expect this card to dramatically increase the variance and power level of that format...