@desolutionist if you're looking for more advanced play, I like the new Challenger decks. They're a great way to capture Standard feel.
If your looking for the most basic stuff, like REALLY basic, to teach, Open House decks are awesome (don't know how you can get'em during pandemic, but maybe someone has a few to sell on eBay?).
Other than that I'd go with Jumpstart, like people said here, or Duel Decks seem fine.

@evouga the key is Artifact. I have no idea if there's a game breaking Artifact for it though. Bolas's Citadel is just worse than Grisel I guess. But maybe there's a high cost Artifact that can break this. 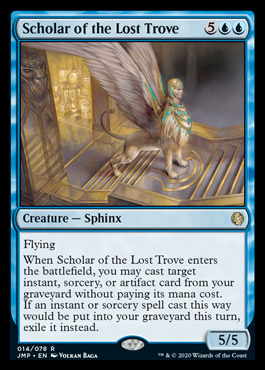 When Scholar of the Lost Trove enters the battlefield, you may cast target instant, sorcery, or artifact card from your graveyard without paying tis mana cost. If an instant or sorcery spell cast this way would be put into your graveyard this turn, exile it instead.
5/5

Well, so Oath turns into Tinker, but also could turn into Yawg Will or pretty much anything. This seems pretty cool.

@thewhitedragon69 I'd say in a Vintage context speed is much more important than hexproof, so Supreme is probably better.

Also, Dimir Cutpurse and Eidolon of the Great Revel are spirits. Off-color, but I wonder if splashing red is the way to go.

This is my main issue with it. I find it very disturbing that they'd choose to go this route after all this time. This is just weird and opens up a very bad precedent.

@evouga hahaha that's pretty cool. Although Commander is the most popular format in the game, which completely disproves that theory. Also, as someone mentioned here, a LOT of other cardgames go with the "starting Hero/Tribe/Faction" card and work. L5R is a good example (in fact, it's a perfect example since their "sensei" were introduced to the game after it was already alive, just like companions to Magic.
Of course, none of those games is as famous as Magic, so maybe they're doing it wrong. I just don't see how Companion ruins variance. It just changes it - and I can't be sure if it's for the best or worse if the game became a companion game (with companions being printed almost every set). I'd agree it's probably worse, but who knows.

@evouga having a companion in no way means there's no randomization. You can't be serious.

@protoaddict They manage Modern and Pioneer with more care. For Vintage and Legacy nowadays the banlist is just a response to internet outcry. They don't even try anymore, just gather what people are complaining about and act on it.

Wizards will never remove companion as a mechanic. The argument that other card types are banned like that is nonsensical since the card types banned are clearly not meant for constructed play. This is way different and there is no way they'll remove that as a mechanic. Suggesting this is similar to suggesting they'd ban all Delve or Phyrexian mana cards instead of Dig/Cruise and Probe/Misstep. It won't happen.

They also won't errata how companions work. This is also something they haven't done in a long time and would open a lot of phylosophical questions about the game. You wouldn't even want that because that would mean they're willing to errata cards for power level reasons instead of banning them, an approach only online-centered card games take (nerfing), which would be terrible for Magic.

I also don't see any problem whatsoever with banning the card. It has been discussed before (I clearly remember this being the case for Yawg Will circa 2006, with Menendian advocating for it constantly) and this would be clearly an exception to the rule since a restriction wouldn't solve the problem. It's bad, I agree, but it's the only solution possible. They'll probably wait a while before doing this, to see if the meta adapts. I'm just sad that there's a high chance Narset got restricted for no reason.

You can basically always draw your entire deck if you untap with this/have enough mana.

Well... If you want to untap with this you'll have no hand... So I don't think it works like that.
There's another card in the set that draws 1 per spell and has no discard clause though.