This thing is just awful. Cabal and Unmask have a "free" mechanic. Most often with this, you are 2 for 1-ing yourself and spending Mana to boot.

That card also has Flash.

My point being... not often. So, sure 20/20 Flash (I'll give you that), Flying and Indestructible an we still barely see it.

How often does a 20/20 Flying/Indestructible show up? 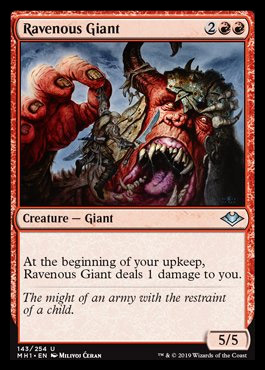 This isn't a discussion on the card itself, because even Juzam is pretty awful by today's standards. We have already seen the color shifted Donate (curious both have been to red), so this isn't new new. Juzam is just the highest profile color shifted card we've seen yet.

However, the question I am curious about is what is the best reserved card we could hope to get color-shifted?

PS: I love the card. It is such a throwback to Juzam. They weren't even trying to be subtle.

1 - This mulligan does have some corner cases where it is not strictly better, and many that are. The one thing I can think of is that on the mull to 6 you technically see the same number of cards, but you have the option not to bottom one on a keep. Additionally if you put the scry on top you are protecting it from duress for a turn, where as in the new rule it has to be in your hand.

Although you see the same number of cards on a Mull to 6 (Draw 6+ Scry vs Draw 7- Bottom 1), it is functionally different. On a mull to 6+ Scry, you have to determine you are keeping your hand based on only seeing 6 cards. The Draw 7-bottom 1 lets you see all 7 cards and keep the best 6.

The counter case to your Duress example of course is fetchlands. There have been a greater than zero number of times my opening hand of fetchlands have been pinned down due to the opening scry.

@griselbrother said in Spell Snare - Time for a comeback?:

@countdabubba said in Spell Snare - Time for a comeback?:

@craw_advantage When it's useful it's a 1 for 1 trade that nets you 1 mana over your opponent. When it's not useful you get mowed down by an opponent who deploys their gameplan while you sit there helplessly with a reactive spell in hand.

I think costing zero mana vs costing one mana (even though they are both +1 mana advantage, assuming you're not misstepping a misstep) makes Misstep worth the risk of this situation.

Sure, they're both gonna be irrelevant at some point. (That's the drawback of cheap conditional counters), but costing no mana makes Misstep worth it.

No mana over one mana is greater than the difference of one mana.

In this case, both players did something. There was an interaction.

Scenario 2
Player A casts a can't be countered spell (did something), Player B... (did nothing)

In this case, only one player did something. There wasn't an interaction.*

Now that doesn't mean interaction can't come later, I was just responding to your comment that counter spells are "uninteractive".

This type of play is often called "interactive", but if you are playing against a deck that does not have counterspells it feels one sided and often dumb.

"Can't be countered" is the epitome of "uninteractive."

Normal Progression: Player A casts a spell, Player B chooses to counter or not= Interaction

Can't Be Countered Progression: Player A casts a can't be countered spell, Player B... = No Interaction.

With out counter magic, Vintage becomes a drag race. No interaction, just who can execute their strategy first.

Honestly, I feel like this is the problem with Modern. The counter magic is awful each player is can just do what they want to do.

You cast another Mnemonic Betrayal during your extra turn.

Or even during the same turn.

I guess in a world where we're casting Time Warp... sure...